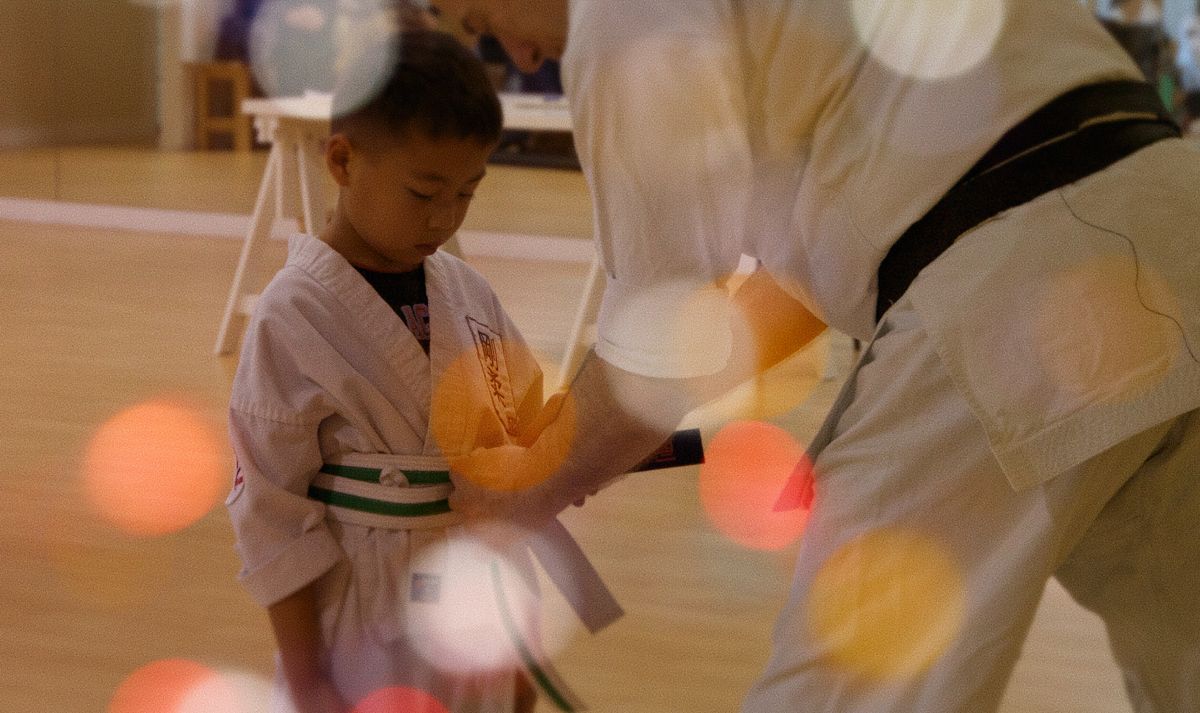 Dan and Kyu: How Ranking Works in Martial Arts

Martial arts that are Asian in origin follow the same ranking system, regardless of the type of martial art: this applies to karatedō, judo, wushu (kung fu), and any other martial art that has its historic roots in Asia.

There are two major rank groupings that are used: dan and kyu ranking. (Note that these are Japanese pronunciations of the kanji 級 (kyu) and 段 (dan); for instance, in Standard Chinese, kyu would be pronounced ji and in Korean, kyu is pronounced gup).

Kyu and Dan literally mean some variation of "level" or "stage" or "rank" – however, there is also some colloquial usage of kyu to mean  "boy or young man" – and dan of course means "adult man."

Regardless of meaning, students begin in the kyu ranks and progress to the dan ranks.

In other Asian arts, such as those that play the games of Go or Shogi, or engage in non-martial arts such as flower-arranging, these rank designations are also used (but belts and belt colors are not).

Kyu ranking is what is generally considered to be "color belt" in rank, although this is a misnomer. There are many branches of wushu (kung fu) that certainly use kyu ranking, but have no belts or very limited belt or sashes as part of their basic uniform.

In addition, the colors that correspond to each kyu are somewhat fluid (more on this later).

Kyu ranks begin at ten, and progress to one (the highest kyu rank). Dan-level ranking begins after first kyu.

Kyu-ranked students are juniors, including beginning students who hold a 10th Kyu rank.

In Japanese, these students are termed Mukyū 無級 or "unranked/ungraded" – this term can also be used to refer to persons who are not students or training in a martial art.)

Students who hold a kyu rank from eight through fifth kyu are consider "junior kyu students" or "junior color belts."

And students who hold kyu ranks at or above fourth kyu (green belts and brown belts) are considered senior kyu students, or "senior color belts."

Dan (pronounced "don") ranking is generally referred to as being a "blackbelt"  – but this distinction barely scratches the surface of what it means to have a Dan ranking.

In looking over the designations of each Dan rank, it's worth pointing out a few things on terminology.

Note that the Dan rank of 1st Dan is not called "ichidan" – shodan literally is "beginning or beginner" Dan rank (consider the concept of shoshin, beginner's mind – the root kanji is the same).

Reading further, note that 4th Dan is not "shidan" but rather, yondan. This is because the Japanese word for four is pronounced similarly to the word for death, hence Yondan is used instead of "Shidan."

The Significance of Blackbelt Ranks

Blackbelt ranks tell us much more than relatively seniority: they really talk about and recognize the contribution of the karateka holding the rank to karatedo in general.

Shodan and Nidan students are clearly senior-ranked, but generally the rank is based on knowledge, experience, skill, and demonstrated competence at the karatedo subject matter at their rank. Like all blackbelt ranks, Shodan and Nidan karateka are expected to make a contribution of time and effort to their dojo and are considered responsible for helping teach their juniors and advance the interests of their dojo.

Being a blackbelt is much more than just being "senior" – it also means being responsible for the health of the dojo community, and for the dojo community as a whole. Blackbelts are the living repository of dojo kun (the dojo's philosophical underpinnings and the norms and rules of the dojo)

However, at Sandan, a shift begins. While Sandan are expected of course to possess and demonstrate competence in the karatedo subject matter at their rank, they are also expected to take an active part in teaching at their dojo. During the start of class, their presence is acknowledged by name, instead of as being part of the group of blackbelts present. They line up at the start of class in their own line on the left, not with the other blackbelts in the first line at the right. They turn and face students when acknowledged during the bow-in. Clearly, they are not only senior members of the dojo community, but they also contribute greatly to the operation of the dojo and its training.

And then at Yondan, a major shift happens. Yondan ranks are awarded to those who have demonstrated mastery of karatedo subject matter and also significant skills in teaching and leading classes – and even leading a dojo. And at Yondan, blackbelts are no longer referred to as "senpai" (senior). They now are Sensei, and referred to as such.

After that, further ranks are really based on contributions to karatedo in general. Much more about that can be said, but is outside the scope of this article. However, understand that very few karateka have every legitimately earned and worn blackbelts in the higher ranks, and a rank of Judan has only every been awarded posthumously (notably, to Gichin Funakoshi, the founder of Shotokan and the Japanese Karate Association).

There are two "modifiers" that can be applied to any Dan ranking (these are never used with kyu ranks).

"Ho" is used as a suffix when a karateka is awarded a permanent provisional rank. The rank is permanent although the expectation is that the student is working towards testing for, and successfully being awarded, the full rank.

A common example of this arises when students join a new dojo, but have significant dan-level experience at a previous dojo within the same type of martial arts (or one closely aligned – for instance, karatedo and aikido).

In a case like this, the student, after testing, may be awarded a shodan ho rank, until he is able to test for a full shodan rank.

A ho modifier may be used with any Dan-level ranking – it is possible to have a shodan ho, a nidan ho, a sandan ho, etc.

Note that any rank modified by ho is considered junior to the full rank. So for instance, a shodan ho is junior to a full shodan rank.

"Kari" is the other modifier that exists for dan ranks. It is a temporary provisional rank and is awarded when a candidate for a rank isn't quite able to fulfill all the requirements of testing for an unusual circumstance.

Note this is a temporary provisional rank. The candidate is awarded the kari version of the rank, and given a clear path to follow in training so that, in a reasonable time subsequent to testing, he is able to receive the full rank.

So for example, one might have a kari nidan or a kari yondan (note that, unlike the ho modifier, kari precedes the rank as a prefix).

A common example of this situation is kari yondan; a karateka might pass the ranking examination, but not have the experience yet in being able to lead classes or even a dojo, and needs time to gain that experience. A year of teaching classes weekly might be sufficient, and made a requirement by the examination board of being granted the full rank of yondan.

Shonen: What about the Kids?

All of the ranks – kyu and dan – mentioned so far can also apply to kids, but there are exceptions.

First, any rank applied to a non-adult (that includes teenagers as well as kids ranging in age from four to eleven) is referred to as a "shonen" rank. Shonen means "junior" or "young" and can be seen as synonmous with "kid."

This means a teenager might be a blackbelt, but their rank would actually be shonen shodan. Or a five year old might have an 8th kyu rank, but might be referred to as a shonen 8th kyu, or shonen blue-belt.

That said, most dojo make a distinction in belt colors for kids between teenagers (who are more senior and mature, and who in theory can become shonen blackbelts) and other, younger kids (who cannot, for instance, become shonen shodans). An eight-year old might be a blue belt (8th kyu) rank, but might have a different "style" of blue belt from that of a 14 year old teenager at the same "rank."

The history of belt colors is fascinating, and again, beyond the scope of this article. However, historically belts and belts with colors to designate rank are basically a twentieth-century addition to karatedo. Prior to that time, students were certainly ranked as described above (with some exceptions) but belts weren't worn.

As belts began to be used, several factors emerged. Dan rankings were always blackbelts, and 10th Kyu students were always white belts. Shortly after the introduction of belts, brown belts were designated for the most senior of the kyu ranks (usually 1st or 2nd kyu; occasionally also including 3rd kyu students).

All other belt colors are somewhat fluid, and don't really have much meaning. Blue, Yellow, and Green are the most common colors, but some martial arts also include or substitute a Purple belt. Some dojo also add an orange belt, but generally this is for young children.

And generally, odd-numbered kyu ranks usually don't involve a change of belt color, but rather the addition of a stripe or other adornment to a belt to indicate the advanced rank of that kyu. For instance, a student might receive a brown belt at 2nd Kyu, and then a stripe to sew onto that brown belt at 1st Kyu.

Advanced stripes are used with kyu ranks – they are never associated with dan ranks.

And finally, red belts are problematic. Generally, they are considered "ceremonial" belts worn by very senior blackbelts, such as a chief instructor or the founder of a dojo. They are worn at special occasions (such as Kagami Biraki or at rank testing) and are never worn during training and rarely during teaching. Some dojo, however, do use a version of a red belt as a senior rank designator, although this is somewhat non-traditional.

This also applies to blackbelts: a shonen shodan would have a black belt, with a white stripe through it, to indicate it is shonen blackbelt.

Ranking as Celebration and Achievement

In the end, ranking in martial arts is very well established and generally well-regulated. The main purpose of ranking is to create a structure that recognizes and communicates clearly and easily the experience, skill, and knowledge of the rank-holder.

And as such, ranking helps to strengthen the dojo community as well as gives structure to dojo kun, the norms and practices of the dojo.

But perhaps most importantly, ranking is a way to celebrate the achievement and hard work of karateka. And in doing so, ranking gives all of us something to strive for and to enjoy.

The 2022 Edition of the Tameshiwari Tournament featured an incredible range of breaks.
These are the official, generally accepted rules for Tameshiwari (Breaking) Tournaments conducted since 2014.
Kagami Biraki is the official start of the dojo year. Find out its fascinating history and unique place in karatedō.