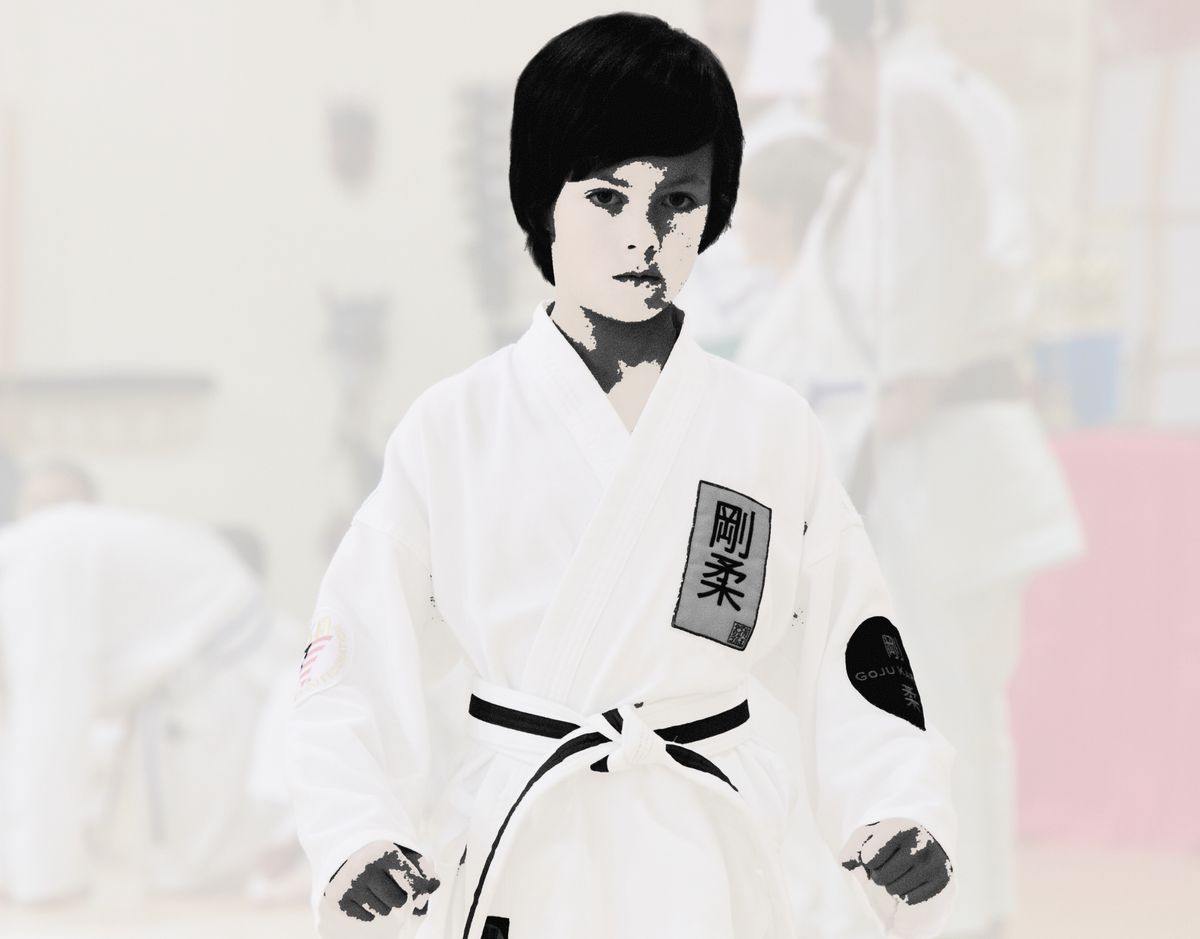 Goju [pronounced "gō" as in the English "to go fast" and "Joo”] means "hard, soft" – it expresses the very powerful, basic, and universal truth that that everything and everyone has two sides, two aspects, and two natures. The universe, in summary, is a two-sided coin.

Our Karatedō, But Much More

Goju karatedo (or "goju ryu" – literally the school or style of hard/soft) is the “style” of karate that we teach and practice at our dojo.

This kanji (剛柔) is worn by Sensei, and by all Goju students.

Historically, Goju karatedo is one of the most fundamental and traditional schools of karate, and still retains much of the influence of Chinese martial arts (the “ju” part), much of the native Okinawan martial arts, and of course, adds more modern Japanese influences (the “go” part).

However, aside from this, there is a much more important and philosophically richer meaning to the name of our school and style: 剛柔 teaches us that all of life, all of nature, and on many levels, the universe itself is a constant balance and a constant contradiction of Hard/Soft, Powerful/Fast, Rigid/Flexible.

We see this many times in everything from the design of vehicles and computers to the relationships that we have with our partners and our friends. Goju teaches us both the reason that things are as they are, and to appreciate that.

Goju reminds us both for the need for balance, and for the need to understand that this balance is a necessary, and in many ways, a wonderful, thing. This contradiction gives us a deeper understanding into the “why” of things – why does a job pay such a good salary (Gō), but demand so much hard work (ju), and why must you work hard (Gō) to get the rewards that you wish (ju)? The reason of course is because there exists a balancing relationship between hard work and reward.

Goju also gives us a deeper appreciation of the things that exist – for example, if a friend that is such a wonderfully sensitive and caring person (Gō) is also easily upset (ju), it is important for us to accept that these two parts of the same person must exist – we cannot have what we desire and is pleasant, and not also accept and appreciate the part of this person that goes hand-in-hand with it, and possibly even makes that trait we desire possible.

A Shorthand Understanding of How the Universe Works

Just like any coin has two sides, so does everything else that exists in the universe possess two aspects. One cannot wish that a coin had only one side; similarly, one cannot choose to accept one aspect of a thing without acknowledging that it must have at least two aspects (and perhaps even more).

Goju as a concept describes how the whole universe works, and the people and things in it.

People are the best example of goju – we ourselves are contradictions, and finding balance means both understanding the contradictions inside ourselves and then accepting them. Only after we do these two things can we, if we choose, decide to change and improve ourselves in the ways we desire.

Our friends, loved ones, even our employers or our employees are also examples of this contradiction in terms. If our girlfriend or boyfriend is sweet and romantic, but also is impulsive and sometimes (in small things) irresponsible, we cannot desire the romance without also appreciating that they want to find a taco place at 1AM.

Goju doesn’t mean that we have to accept the world as it is… or even accept the people in our world as they are.

We can make choices. We can change the world, we can change ourselves, and we can decide what people will be in our world. We can even negotiate with the people in our world and strive to “tip the balance” in favor of what we desire and less in favor of the consequences of that part of them that we appreciate less. But we have to be conscious that this is a negotiation, a process, and that we have to respect the integrity of the people in our lives to be what they are.

Once the concept of goju is fully grasped, to a karateka anything is possible. Anything.

Editor's Note: This lecture has been delivered by Sensei many times, both at the Goju Karate dojo in various places, as well as other dojo and at other venues. Among those times, one of the most well-known lectures on this topic was delivered by Sensei in San Rafael, California on 17 June 2013 at a special seminar and meditation class for instructors and senior dan-level karateka. Most recently it was delivered at the Goju Karate NYC Dojo on 14 December 2022.