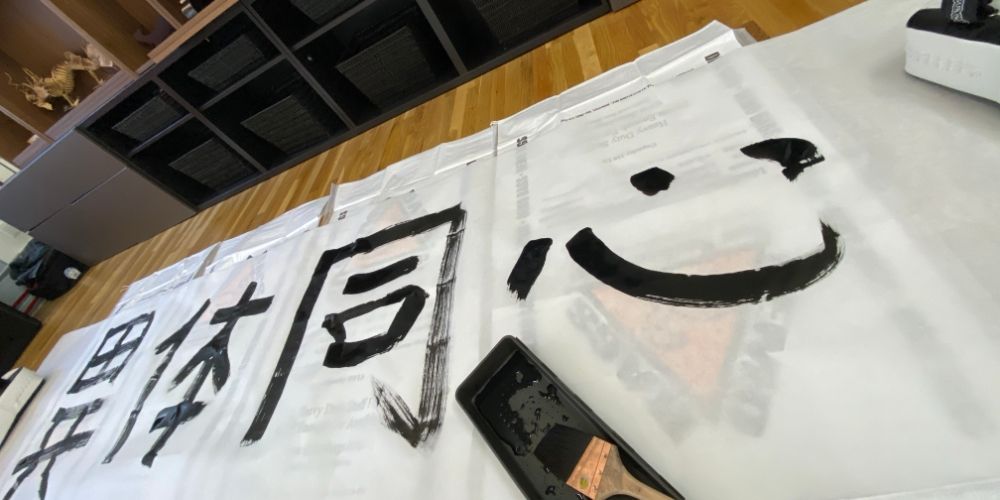 Kagami Biraki is the the traditional start of the New Year for a karatedo dojo, and in fact is also the start of the year for many other martial arts schools. Kagami Biraki has millions of participants every January, and is celebrated internationally. Attending and being part of Kagami Biraki means being part of an international event that circles the globe, and is shared by all of your brother- and sister-karateka, as well as other martial arts students, everywhere.

The hallmark of Kagami Biraki is the group workout that includes both adults and kids.

Kagami Biraki is an event for all students, including kids, and it is the only time during the year that both adults and kids train together on the dojo floor. Parents of younger children are encourage to remain and watch the event; however, many adult students will offer to mentor young kids so that they feel comfortable working out with adults.

And of course, Kagami Biraki is a great opportunity to train together as a family. One of the hallmarks of karate (perhaps more than any other martial art) is the strong involvement of students from the same family training, and generally Kagami Biraki is the only chance that an entire family of adults and kids can train together at the same time.

Most dojo (including ours) welcomes family members who don’t train to also stay and both watch the group workout and attend the lecture following.

The workout is typically about an hour, and includes strong emphasis on very basic techniques (kihon) — hundreds of punches and kicks are thrown, hundreds of push-ups and crunches are performed. The workout consists of basic techniques and sharing strong spirit – kata, ippon kumite, and other more “technical” material is not the focus of Kagami Biraki. Rather, demonstrating and practicing strong spirit is the true purpose of Kagami Biraki, and raising the spirit of the entire dojo community is the goal.

After the workout portion, a shodo lecture (a lecture on an aspect of karatedo philosophy) is delivered by Sensei, setting a message for the rest of the year. Typically, the message chosen is something specific to the dojo — perhaps the celebration of an anniversary of its founding or the achievement of some sort of goal — or is an inspirational message for students to help them achieve goals, define objectives, or otherwise enhance their personal philosophical outlook on the new year.

The phrase “kagami biraki” literally means “opening the mirror” but more figuratively refers to a ceremonial resumption of activities.

The actual celebration dates back to the time of the Tokugawa Shogunate in feudal Japan, centuries ago. Tokugawa Ietsuna, the fourth Tokugawa shogun (a “shogun” was the effective ruler of Japan, serving as the military and political representative of a then-powerless Emperor), is reputed to have gathered his top military leaders and advisors on the eve of a major battle.

He held a banquet at Edo Castle (likely in 1669 AD), and during the banquet presented a mirror and a cask of sake (Japanese rice wine), which he proceeded to open.

The Shogun’s forces were successful, and since that time, it became a tradition to celebrate a “beginning” of the New Year to embody strong spirit and best wishes for great success.

Over time, the celebration of Kagami Biraki was fixed to January 11th (it is unclear if that actual first banquet was on exactly that date) and this is the date generally referenced as Kagami Biraki. The connection to martial arts, however, occurred some two hundred years later.

In January 1884, Jigaro Kano (the founder of modern-day Judo) introduced the specific celebration of Kagami Biraki to his dojo, the Kodokan, and held a group workout and a meditation lecture.

Kano was deeply interested in solidifying and creating a connection between martial arts and traditional disciplined cultural practices from the feudal (“bushido” — the way of the warrior) era in Japan’s history, and he felt Kagami Biraki would lend itself well to focusing the attention of his students on renewing their spirit and commitment to train hard for the coming year.

By the 1970s, the vast majority of karatedo dojo throughout the world and a huge number of other types of martial arts schools began their year with a Kagami Biraki event.

Traditions at the Dojo

A number of traditions have entered the common practice of Kagami Biraki over the years. Note that not all dojo participate in every single one of these; the most important part is the group workout and the shodo lecture. All of the other items associated with Kagami Biraki serve to support that, and are meant to help focus the attention of students and the dojo community on the importance of starting the New Year with a renewed commitment to training and self-improvement.

To begin, on the first day of January, a branch from an evergreen plant or tree (pine of course is the most common) is placed over every window and door that leads to the outside (interior doors aren’t decorated in this manner).

The symbolism is actually a combination of old shinto practice as well as a common practice of decorating with evergreen branches in both Asia and in Western Europe. Because evergreens are “green” in the cold, dark days of winter, they’re thought to have “magical” properties. More specifically, they call to mind longevity and wishes for good health; and in shinto practice and in some Western practices, evergreens over entrances ward away “evil spirits” and keep the dojo safe from bad thoughts until the strong spirit of Kagami Biraki can banish them for the entire year.

(Please note that no one seriously thinks evil spirits bedevil the dojo: but it’s a great way to consider that our own positive thoughts help us to commit to hard training and great accomplishment, and banishing unproductive thoughts is a wonderful practice at any time of year, but most especially, at the beginning of a new year.)

Also on the shinzen you’ll typically find the “kagami mochi” — a small stack of mocha and an orange of some kind.

(The shinzen is the focal point on the dojo floor that holds small symbols of importance to the founding Sensei of the dojo, the current instructors, and the students of the dojo; it may also have shodo pertaining to the school, its style of martial art, and the important philosophical concepts it teaches.)

Kagami mochi is a somewhat mysterious item in the lore of Kagami Biraki. There is no documented origin for its initial association with the event, but we do know that kagami mochi came into popular use in association with kagami biraki sometime in the late 18th and early 19th century Japan. However, they existed much earlier than that, going as far back to the Muromachi Period in Japanese history (1336 to 1573 AD).

It consists of two mochi disks (mochi are a rice cake). One disk is larger than the other, and the combination is thought to represent two mirrors, stacked upon one another.

The kagami mochi are usually decorated with an orange (usually a “bitter orange) on top, and lightening shape banners thought to bring good luck and symbolize strength and power.

After Kagami Biraki, the mochi can be broken up and placed in a red bean soup or even eaten directly (rarely, though: they are hard and not very tasty by themselves).

The final element of Kagami Biraki is the most important: the message for the New Kagami mochi Year.

Typically one of two types of messages are chosen: either an important concept for self-improvement or uplifting spirits; or a message related to a special goal or project of the dojo for that year.

The message is announced after the group workout, and is presented usually in two ways: a special kind of board is created that holds the kanji (the characters) for the message, and a temporary banner is made that is placed across the entire shinzen.

The shodo board is kept all year; many times it has a special decorative wire or thread to indicate it is the message for the year in contrast to other shodo that might be on the shinzen. On the new year, the previous Kagami Biraki shodo is either removed or placed in a different part of the shinzen (and always without the special thread or wire that it had previously been decorated with).

If possible, during the lecture, the shodo board is passed amongst the students, so they can examine it (and if permitted) sign the back of the board with their name to commemorate their participation at Kagami Biraki.

The day for Kagami Biraki is chosen and announced sometime before the New Year begins: typically this is a Saturday or Sunday, and if possible, is close to January 11th. However, any day during January is perfectly fine for Kagami Biraki. The vast majority of dojo hold their Kagami Biraki on a weekend day during the second or third weekend of January.

And finally, about a week after Kagami Biraki, all of the elements that were used to decorate the dojo are removed: the evergreens come down (some dojo keep a piece of the evergreen in a special clay jar on the shinzen), the temporary shodo banner across the shinzen is removed, the doors of the kamidana close, and the dojo begins its New Year of training. Some dojo hang the shodo banner in a different part of the dojo, and others keep the banner and use it to wrap important items (including next year’s shodo boards). Some dojo simply discard the banner. (Note that the kagami mochi are opened and eaten or removed on the day of Kagami Biraki itself).

Once Kagami Biraki is over, the dojo returns to business-as-usual, ready to tackle the challenges and opportunities of the new year with a strong spirit.

Endurance classes get a new tool for measuring progress.
As all of our students know, there is always free fruit at the Front Desk of the dojo. So far it’s been apples and oranges, but we may get more exotic occasionally. The fruit is completely free – staff and instructors encourage students (adults and kids and visitors) to take
Goju Karate is a non-profit enterprise dedicated to supporting and bringing karatedō to everyone.