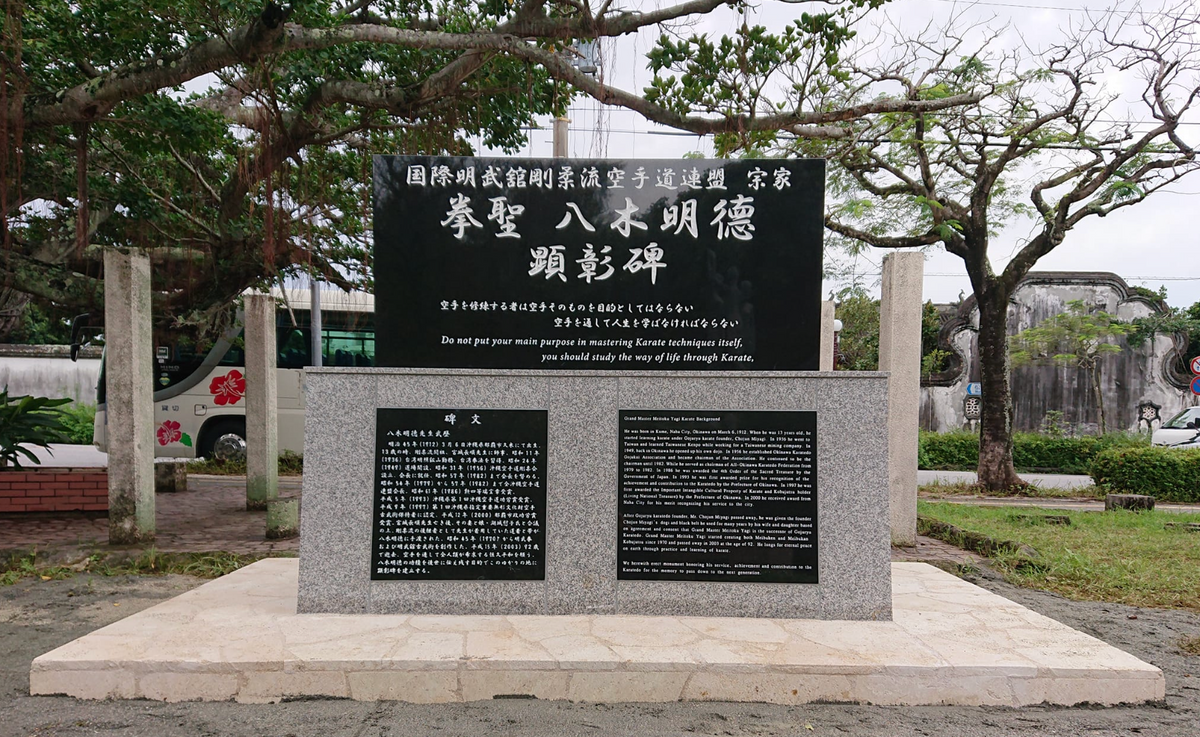 Karatedō represents an unbroken tradition and school of martial arts and thought that has its roots shrouded in the millenia of time.

However, in the modern era, we know much about the men who brought karatedō forward from those shrouded roots into our current times: one of those men was Chojun Miyagi, the modern-day founder of Goju Ryu ("literally the school of Goju – hard/soft") and his most important uechi deshi ("inside student" an important position within a dojo) was Meitoku Yagi.

Today, we have an opportunity to contribute to the completion and maintenance of the sole monument to Meitoku Yagi, and we'd like to invite you to do so if you are able to do so.

The History Before "How We Got Here"

But first, some history – because as you've heard so many times in class, especially at Meditation+Shodo Class, history provides context and informs meaning.

We do know the identities and some of the life stories of important karateka in history that predate the late nineteenth century, but the modern era can be said to have begun around 1890, and truly hit its stride in the 1910s and 1920s.

By that time, three monumental figures in martial arts history worked to formalize and publicize martial arts, and specifically karatedo: they were Jigoro Kano (founder of Judo and the Kodokan), Gichin Funakoshi (founder of Shotokan karatedo) and Chojun Miyagi (founder of Goju Ryu karatedo).

Of these three, Chojun Miyagi was the most influential Okinawan teacher and thinker, and he produced a small group of senior students (many uechi deshi) that would go on to significant success.

One of those students was Meitoku Yagi, who would found the Meibukan Dojo (and later, the IMGKA, the main association of Goju Ryu dojo).

How We Got Here

So, with the stage set, one must ask the question of how this history pertains to the twenty-first century, and our dojo in specific.

Our primary connection is via Sensei's main Goju instructor and mentor, Shigeru Yamaguchi Sensei (who was a direct student and uechi deshi of Meitoku Yagi and Meibuken). Sensei holds a senior dan ranking in Goju Ryu karatedo (and is one of about a half dozen senior dan-ranked blackbelts in the United States).

In addition, though, because of their close geographic proximity in the Boston, Massachusetts area, Sensei also trained with Anthony Mirakian Sensei (who lived on Okinawa and was an uechi deshi of Eiichi Miyazato Sensei, one of the other uechi deshi who is best known for having assumed leadershio over Chojun Miyagi's garden dojo before later moving to found his own).

In this blizzard of historic connections, one thing is clear: we would not exist had it not been for the important work of Chojun Miyagi, Meitoku Yagi, and many others.

Meitoku Yagi was one of the most influential karateka of the latter part of the twentieth century, second only to Mas Oyama himself (Chojun Miyagi, Gichen Funakoshi, and Jigoro Kano had all died by the end of the 1950s).

Truly, his senior students and uechi deshi brought Goju Ryu karatedo to the rest of the world, and his impact on future karateka can't be underestimated.

As an example of this impact, Japan's Emperor Hirohito named Yagi a Living National Treasure (ningen kokuho) for his contributions to the martial arts on April 29, 1986.

One of his best-known expressions (mirroring the thoughts of both Chojun Miyagi and Gichen Funakoshi) was:

Do not put your main purpose in mastering Karate techniques itself; you should study the way of life through Karate. – Meitoku Yagi

(In fact, this quote was inscribed on the side of the monument.)

Meitoku Yagi died on February 7, 2003 having left an incredible legacy. Up until now, however, no monument has existed to mark his life and accomplishments.

In 2022, however, efforts began to build such a monument on Okinawa in a  public park famous for its martial arts monuments.

The main part of the monument was unveiled in late November 2022. However, there are still ongoing costs as well as long-term maintenance that must be paid for, and for that, please consider donating.

To do so please, click the button below and make whatever contribution is comfortable. Alternatively, you may also also make a contribution at the Front Desk at the NYC Dojo.

One hundred percent of all contributions will be directly sent to the Meibuken Dojo in Naha on Okinawa in support of this undertaking.

Every year, the dojo presents a unique cycle of four meditation+shodo lectures during the first four weeks of January.
The Koenkai 2023 Meeting will be held immediately following Kagami Biraki on Saturday, January 14, 2023.
The 2022 Holiday Fund donation drive has begun -- please give generously.