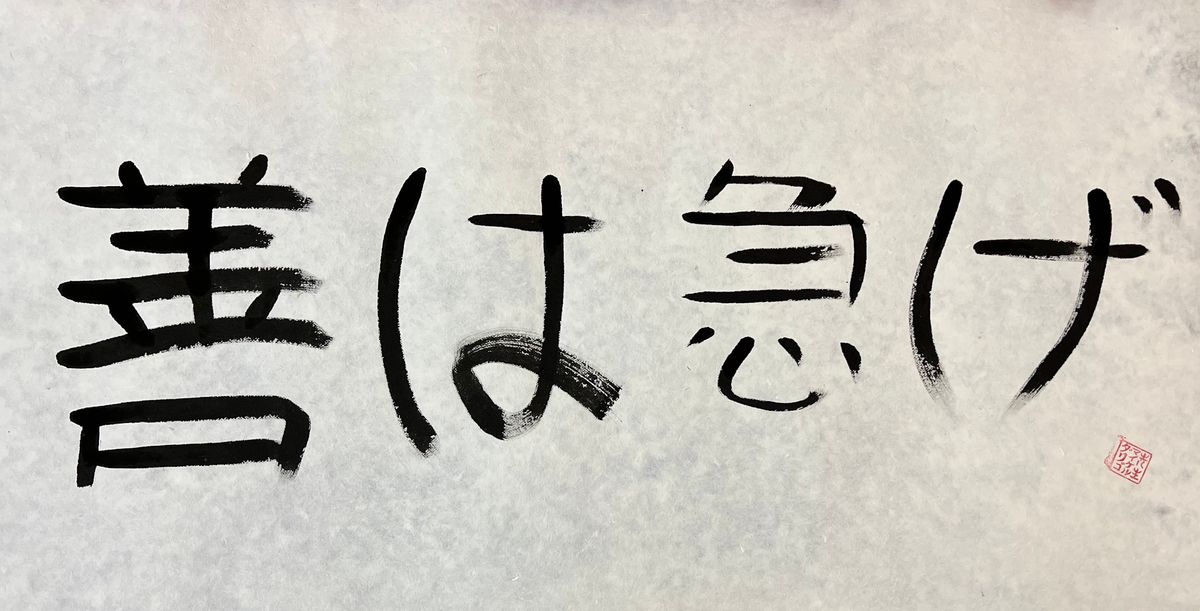 Zen wa isoge 異体同心  [pronounced “zen way ee-so-gay”] means “rushing is good” — and reminds us most succinctly that time is not only precious, but our supply of it is quite limited.

Success belongs to those who do not waste it, and do not dally on the way to creating a satisfying life of accomplishment.

The Fundamental Reason that “Rushing is Good”

In 1915, the RMS Lusitania was considered one of the premier luxury cruise liners in the world, plying a route between New York City and Liverpool, England.

As a British-flagged ship, in theory it risked attack by German submarines as World War I was already raging, having started the year before, and featured a cat-and-mouse naval theater of war in the Atlantic, as Britain and its allies sought to keep their supply lines open and German forces sought to shut them down by sinking cargo and troop ships near the British Isles and those on their way to and from Britain’s shores.

On January 30, 1915, the Lusitania left port in New York City and crossed the Atlantic, marking its 200th transatlantic crossing, and carrying more than a thousand passengers and about two hundred crew.

The ship was full, despite the fact that the war was raging at full force, and despite the German Embassy placing advertisements in the newspapers of the day in the New York City (some even placed directly next to notices of the Lusitania’s sailing) warning against traveling on British (combatant)-flagged ships on their way to ports in Britain.

The ship carried its usual star-studded range of passengers (Atlantic steamship travel was expensive, and travel aboard the Lusitania was beyond first-class, in terms of service and in terms of price). The ship included famous actresses, a former US Senator, and the cream of the crop of American and international business tycoons and the wealthy.

As the Lusitania approached the Irish Sea on the morning of February 6th, crewmen spotted the tell-tale towers of lurking submarines, and the Lusitania undertook some basic evasive maneuvers (the submarines of the day had only crude torpedoes: a fast ship like the Lusitania, at its top speed, generally could outrun and outmaneuver them).

Heading quickly for port, the Lusitania docked at Liverpool later in the day, and the thousand-plus passengers disembarked and made their way to their hotels and their final destinations. The newspapers of the day would chronicle the famous and wealthy as they disembarked, and the trip made reasonably prominent headlines.

The second American voyage of 1915 (and the 202nd transatlantic crossing) for the Lusitania left New York City’s main passenger terminal on the west side of Manhattan on May 1, 1915. Once again, about 1,200 passengers and crew were aboard, and of course, it was laden with the usual complement of wealthy financiers, Hollywood celebrities, and many more notable passengers.

And once again, the German Embassy had placed another series of advertisements warning that Germany considered any British-flagged ship to be a reasonably target in the Atlantic theater of war, and once again, some of those advertisements appeared literally next to the notices announcing planned departure of the Lusitania.

On the morning of May 7th, as the Lusitania was crossing the Irish Sea, it once again spotted the towers of German submarines nearby.

However, unlike during the previous trips, the evasive maneuvers never started. A torpedo fired from a German u-boat hit the Lusitania broad-side. While the shop was equipped with a large number of life-boats, and variety of other safety devices, the strike caused the ship to almost immediately sink onto its side, swamping and crushing any lifeboats already in the water.

Within a short time, 1,198 passengers and crew died.

Zen wa isoge asks a very simple question: which boat will you be on?

Your Moment is Now

Keep in mind that zen wa isoge raises the question of which boat you're on: it has nothing to do with the answer to that question.

No, none of us can predict the future. And none of us knows the length and quality of our lifetime. But really, it doesn’t matter.

The question isn't really "what ship are you on" – the question is really "assuming you're on the ship that's going to sink, have you done everything you could do to live your life before you get on that ship that will sink?"

Zen wa isoge focuses our attention on what is important to us. And it then reminds us to focus on those things, and downplay, tune-out, and discard the rest.

Don't be distracted and seduced by the stuff that doesn't matter. That "amazing" cat video on TikTok isn't going to help you feel more accomplished, and more importantly, it's not going to actually contribute to anything of import in your life, regardless of how it makes you feel.

Certainly one must treasure the joy of life and all of its myriad pleasures, but a life that isn’t filled with accomplishment is empty. It’s an illusion of existence, and worse, a waste of that previous life and time that all of us have been given.

Put Aside the Distractions

Imagine how some of the people felt, on that fateful afternoon of May 7, 1915. Were they terrified? Of course. What a horrible fate, what a terrible thing to happen!

But while they were all certainly terrified, and all without a doubt were filled with dread and regret, not all of them experiened the end of their lives and left nothing behind them.

Some of those ill-starred passengers built enduring legacies, left behind books and movies and works of art that outlived them and enriched all of us. Some of them built strong families that exist to this day, their descendants making their mark on our 21st century world.

But some did not. Probably most did not, in fact. And that really is the true tragedy that occurred that day, because surely many of the people on that ship could have accomplished much.

But they were on the wrong ship.

And instead of bulding those enduring legacies, they frittered away too much of their time, failed too many times, and in fact, ran out of time.

Distractions are a thief. They steal time from you, and they make no compensation for their theft. Again, a life of accomplishment and satisfaction is also full of pleasures, simple and complex.

But it can't solely contain those pleasures. Your tweet isn't an accomplishment and your Facebook posting isn't an enduring legacy. Your trip to Indonesia was certainly Instagrammable – but it produced nothing of value beyond the temporal pleasure of a visit to a beautiful and interesting place.

Don't board that second sailing having simply led a life of pleasure. Doing so will compound the tragedy of the sinking, immeasurably.

How to Use Zen Wa Isoge

In practical, everyday terms, zen wa isoge reminds us constantly that each and every moment is important and precious, yes; but it also reminds us that we must do something with those precious moments.

Zen wa isoge reminds us to use those moments to further our goals, to move to our purpose as we seek to build a life of satisfaction, accomplishment, and productivity.

Our true happiness is found within that well-lived life, that life of accomplishment. Zen wa isoge reminds us to hurry up, and achieve that satisfaction, and build that life.

If we do that, it really doesn't matter what ship you're on: you and your legacy will endure.

Editor's Note: This lecture was first delivered by Sensei on January 14th, 2023 in New York City, and via Livestream, at the Goju Karate NYC Dojo. Zen wa isoge was chosen by Sensei as the Kagami Biraki lecture for 2023.